The initial stages of construction of the new addition began early this year. It is expected to furnish fifteen extra classrooms. In 1960, a four-story L-shaped addition was built in the courtyard, included language labs, study halls, and a teacher’s café. At the completion of the addition, the need for administration offices, medical offices, a guidance center, and a large well-equipped library was apparent. The addition was completed in 1963 and was followed by the enlargement of the cafeteria in 1965. June 14, 1961 was the final combined graduation for Morton East & West. An Arial view of 22nd Street during the Homecoming parade show how much work went into a successful day. Speedball is a popular sport in the girl's physical education program.

A new centralized Library was moved to the 3rd floor. In 2014, the old pool was filled in, and the room was converted to two supervision rooms. Joe Mantegna graduated from Morton East in 1965. He was also in a band called the Apocryphals.

He made his acting debut in the stage production of HAIR and on Broadway in WORKING (1978). In 1980, he was cast in the popular television show SOAP. He has appeared in the TV series JOAN OF ARCADIA, and currently in CRIMINAL MINDS. He has appeared in many movies such as THE GODFATHER part 3 and BUGSY. He is also the voice of FAT TONY in the Simpsons. In April of 2011, Joe received a star on the Hollywood Walk of Fame.

In 1966, Morton East's student government sponsored a performance by the Chad Mitchell Trio, which at the time included a relatively unknown John Denver. Piles of snow waist deep line the sidewalks and streets. In 1962, 5 acres of land were secured and homes were cleared for the construction of the athletic annex. The annex opened in the spring of 1967.

It was called the Hapac Memorial Gym and Field House. The new Overpass to the Annex. Windows were added the summer of 94. Official dedication ceremonies for the athletic and physical education facilities recently completed at Morton East were conducted in the William J. Hapac Memorial Gymnasium. Representatives from the community, the faculty, and the student body spoke at the ceremony. Developed at a total cost of $5,457,397 and occupying 10 acres, the Morton East High School athletic and physical education complex includes several well-developed facilities.The  Olympic size pool, 75ft, six lanes & 14 ft deep has seating for 500 spectators. The main gym has seating for 3,000 fans in addition to team rooms and specially equipped training rooms. A unique Astro-turf will cover the 1/10th-mile indoor track in the field house. Outdoor facilities encompassing the George S. Fencl Field for varsity baseball and two practice football fields that accommodate physical education classes are among other facilities.

A multi-purpose room for competitive wrestling or 2 individual teaching station has a convertible wall that divides the room to provide two classes. Five classrooms equipped with 40 student desks and a driver education room containing 12 driving simulators are included for physical education classes. A new modern dance room and a girl's gymnasium with shower rooms and locker rooms are also facilities in the annex. 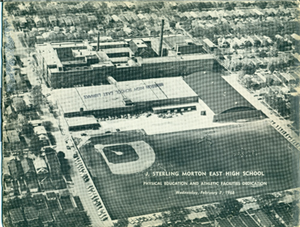 A prominent professional baseball team, the Chicago Cubs, challenged the Morton Faculty All-Stars to a basketball game which tested the strength

of both teams. Ernie Banks, Ron Santo, Ted Savage, Glenn Beckert, Billy Williams, and Kenny Holtzman were among those personalities on the Cubs team. Unfortunately the Cubs lacked the basketball knowledge that their opponents possessed. The Cubs were defeated by the faculty by a score of 85-77. 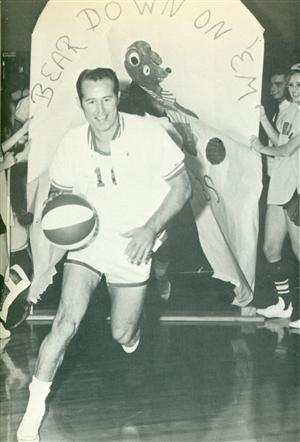 In the autumn of 1969, a teacher's strike was called at the school for the first time in its history. One teacher was arrested for using his picket sign as a weapon against a school board member. The strike lasted 22 days. In November, the striking teachers were charged individually with contempt of court.

November 21st, 1969 changes were made to the dress code. Girls will be able to wear slacks until spring vacation. All students may wear shorts after Easter vacation through September.

Girls - Dresses and skirts are appropriate school attire. Culottes & pant dresses may be worn. The length will be determined by fashion but must be kept lady-like. Girls who wear men's style shirts with tails are expected to wear them tucked within their skirts. Not permitted for the school day: Shifts and splits in the sides midriff and see-throughs. Heavy or exaggerated make-up is not acceptable. Hair style should be one that is casual and that can be kept neat at all time.

Boys - Appropriate dress requires wearing a  dress shirt, sports shirt or t-shirts with pullover sweaters are acceptable. Shirts must be tucked in and kept buttoned. Belts must be worn, blue jeans are acceptable. The hair style should be one that is clean, neat and trimmed; out of the eyes & no longer than the bottom of the ear. It is expected that at all times students must be clean shaven with NO beards or mustaches. Trimmed sideburns should not exceed the bottom of the earlobe.